The strategic location of RAF Leuchars is vital in defending the UKâ€™s airspace from attack and, in the event of an emergency, can be overhead â€œTier Oneâ€ risk targets such as Torness nuclear power station and Faslane nuclear submarine base in just a few minutes.

This is the message which North East Fifeâ€™s MP Sir Menzies Campbell has hammered home in a letter to the Defence Secretary Liam Fox.

As an announcement about the future of the Fife base draws closer, Sir Menzies has been taking every opportunity to make the case for its retention right to the heart of government.

In his letter Sir Menzies said:

â€œThe strategic defence case for RAF Leuchars is overwhelming. Its proximity to more than 4 million people in Scotland and to highly sensitive installations such as Torness nuclear power station, Faslane nuclear submarine base and Grangemouth oil refinery is significant as it means fighter aircraft scrambled in the event of an emergency can be overhead and engaged with any target in a matter of a few minutes. 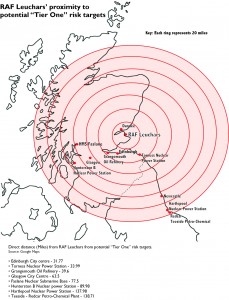 RAF Leuchars is within 80 miles of 80% of the Scottish population and minutes from sensitive "Tier One" risk targets.

â€œThe National Security Strategy clearly states that the threat of an international terrorist attack on the UK is at the top of the identified risks. The Home Office has concluded that an attack is â€œhighly likelyâ€. The role of RAF Leuchars has therefore never been so important.

â€œAircraft from RAF Leuchars have successfully intercepted Russian aircraft probing our air defences on more than 50 occasions since 2005. Leuchars is also capable of intercepting non-military aircraft, whether hijacked or not, which may pose a more immediate threat.

â€œLeuchars is not only uniquely situated, it acts as a deterrent due to its location. Its flying and weather conditions are optimal for operations and together with the exemplary professionalism of the base personnel make it the ideal for the deployment of QRA.

â€œIt is in the right place, at the right time, doing the right job. The reasons for providing air defence for the northern half of the United Kingdom are the same today as they were when it was first given this role. Closure would increase the risk to our citizens.â€